That herb right there is rosemary...

I watched about four hours of cooking TV straight on Sunday, and Spring is definitely in the air, at least in the Food Network's view. The cooks were definitely utilizing lots of herbiage this weekend. Thyme... mint.... rosemary...

I have always been a BIG fan of rosemary. There's something about it that I just love, love, love! For dinner, I decided to use it in two dishes.

First that came to my mind would be a mac 'n' cheese. This is kind of a cupboard-lovin' type of dish because I literally used everything but the kitchen sink for this mac 'n' cheese. But, surprisingly, I was able to make it all myself without the help of a recipe, so kudos to me!

I boiled the elbow pasta and set aside. Then, I made a roux with butter and the very limited flour I had left. I added a mixture of the heavy cream I had leftover in the fridge and water, to provide the role as the makeshift milk for the white sauce. I added the last of the cheddar I had on hand, and because the sauce was still not that thick, I added some cornstarch too. (Plus some Kraft mac 'n' cheese sauce mix my sister left behind one time when she only wanted to boil up the Shrek pasta for Liam's dinner.) The sauce got nice and thick soon after adding the cornstarch, and I mixed it with the elbow pasta.

I wanted to make the mac 'n' cheese special, so I took out the pita crumbs I had in the freezer from my pita-making experiment, and bashed them a bit more in their ziploc bag. Then, I fried them for a little bit in butter and olive oil, with some chopped rosemary added in. (Did I mention I also steeped a rosemary sprig in the white sauce too?)

I topped the rosemary-infused mac 'n' cheese with the breadcrumbs, and baked it for about 30 minutes... Turned out beautiful! 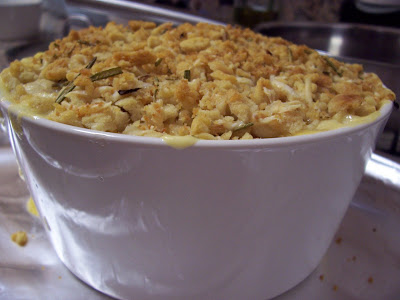 The mac 'n' cheese, as grand a production it was, was really the accompaniment to the main course, the mustard and rosemary chicken. A friend of mine from Melbourne gave me the recipe for this dish, and it looked wonderful on paper. And I was told, was wonderful to eat too!

Here is the original recipe:

Combine mustard, oil, rosemary, parsley, garlic, lemon rind and 1/3 cup lemon juice in a small food processor. Process until well combined. Pour into a large ceramic dish . Season with salt and pepper. Add chicken pieces and turn to coat. Cover and refrigerate overnight. Preheat oven to 190°C. Place chicken pieces on a roasting rack. Spoon over remaining marinade. Roast for 50 minutes or until golden and cooked through. Place on a platter. Serve warm or at room temperature. 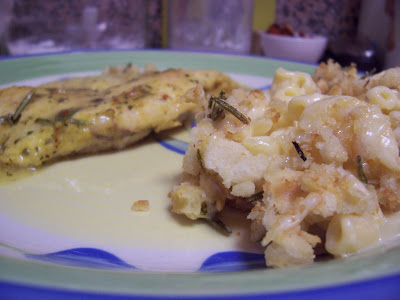 Obviously, from the picture above, you could tell I didn't follow the ingredient list exactly. I didn't have garlic, and I didn't have lemons, so I used lime juice instead and a lemon chicken seasoning my friend, George, sent me from The Spice Shop in London. I also used chicken breast as that is what I usually have at home.

I didn't have any of the chicken as I was pretty full from eating my way througout the day, but Rafa tells me it was very nice indeed. After searing the chicken on both sides in a pan, I transferred the two fillets to a moderate oven to finish cooking. Meanwhile, I made a sauce with the marinade that was left in the pan, and added chicken stock and cornstarch to thicken it.

It felt nice to cook just going on instincts and throwing in just what I feel like. I don't do it often, but it is a nice change.

That looks scrumptious Ilana. I'm so glad you like the spice blend.

Oh that looks delicious Ilana, I could eat it right now and it's only 8am! I just love mac & cheese YUM x