One of the All-Stars

I never really grew up eating fried fish... Which is not to say my mom never made it. She actually made if often. I still remember the smell of the fried fish permeating the walls of our one-bedroom apartment. But I didn't eat it; actually I refused to.

Fish was one of those things that I would never ever touch. It wasn't until college and later that I started eating things like shrimp, salmon, sushi, etc.

I remember being about 9 or 10; it was wintertime. It was already quite dark outside, even though it was only 5 or 6pm. I have a clear memory of myself, sitting in front of a plate of fried fish, crying my eyes out. My mother, probably emotionally worn out after years of catering to a picky child such as myself, was yelling at me, begging me to at least try the fried fish. I couldn't. I wouldn't. I sat there, stubborn faced, until she told me I wouldn't be able to leave the table until I had eaten it. I had a little piece, probably spit it out. I started crying into my mashed potatoes. These are my memories of fried fish.

But, still, I won't make it for myself. Fried fish, or making fish on a regular basis, hasn't really entered my repertoire. But I bought sole the other day, hoping to do something with it. I remember seeing an awesome and droolerific picture of goujons of sole in Nigella Express.

The fillet, being so thin, took almost no time to defrost. Breading it was also incredibly simple. Thin and long slices of sole were dipped into cornstarch, then egg, and then panko crumbs. I'd talk more about my intense love for panko crumbs, but really that would be a post in itself. They are awesome! They make just about anything wonderfully crunchy.

So, I fried the goujons in sunflower oil; I didn't have rapeseed. They took mere minutes to get all golden and ready for serving. 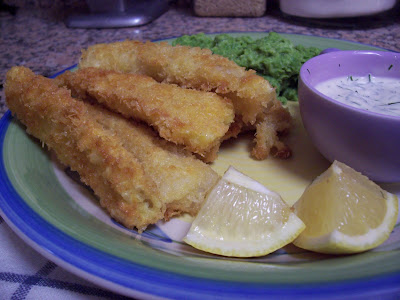 I had made these for Rafa - since he is a big fan of fish 'n' chips. But, instead, I served this up with mushy peas - recipe in Feast; just basically boiled peas, processed with sour cream and parmesan. A little bit of salt is added and delish. Nigella's recipe for the sole gougons included a dill mayonnaise dip. It's basically shop-bought mayo with chopped dill and lime juice to taste.

The fish looked so crunchy that I asked Rafa for a bite. Mmmmmmm. They were really good. They were even better dipped into the yummy and pungent sauce. I'll definitely make these again; maybe a whole plateful just for myself. And maybe with mashed potatoes too. But this time, no tears.

That looks great Ilana :) I've made the dill mayo, but not the fish yet...

From your post about your sister expecting again, I had a look - Sophie has that exact dress, and also a candy pink one the same, but without the ruffle at the bottom hem. Girls look so pretty in these dresses! We always go to that shop for party and special dresses.