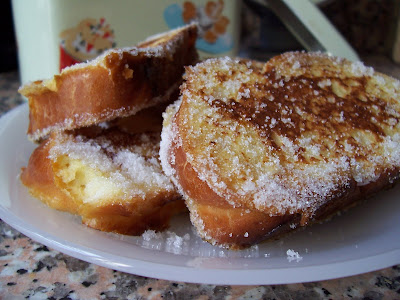 After my emotional post, I thought it would be a good idea to cook something calming. I turned to my signed copy of Nigella Express for some french toast. I love having this for breakfast. My mom used to make us french toast for breakfast when we were kids. We called it grenky, and the bread used was usually what we had lying around - russian bread or Jewish rye. The thin slices from already cut loaves. It wasn't till I started eating in diners as a teenager that I realized Americans eat french toast too, but made with challah bread. Challah was not something we ate that often, but it seemed strange to me to turn it into french toast.

But this morning it totally made sense to me. Challah literally stays fresh for about 15 minutes. Seriously. 15 minutes after it is baked it is better already eaten, or frozen, because it will never taste as good... I baked three loaves of challah last weekend, but I froze two of them. The one loaf that we did have, we only managed to get halfway through it during the week. I didn't want to throw it away, so I turned it into french toast.

Nigella Express has an awesome recipe for a vanilla-scented french toast, that is then dipped into sugar. Mmmmm. Nigella calls it 'doughnut french toast', which is exactly what it tastes like. Instead of using vanilla extract in the eggy batter, I used vanilla sugar. It really came through in the final result.

The toast took mere minutes to make. I think it is a great treat to give yourself after you have had a hard week. Give the recipe a try; you know you want to!

A delicious, comforting dish! I love the picture of you and Nigella - I wish it could have been a better experience for you though!