Now that I’m not-so-cosingly settled into the new place I thought I’d share with you the depths to which I had to go to, to produce a meal the last few nights at my old place.

I still had a bit of frozen (but thawed) spinach left over from that fantastic risotto I made the other night and not much else in the fridge and freezer other than some pizza dough and loads of onions.

I had remembered Gemma’s fabulous onion tart that she made a few nights before that, and I thought I’d make a ‘similar’ version, just with spinach and chorizo. I use the term ‘similar’ loosely as what I came up with was nothing similar in appearance, and probably taste either, to what I presume Gemma’s was.

I had thought of getting some goat cheese, since I’m not exactly sure what taleggio is, let alone what it tastes like… Wasn’t it part of a movie title recently? Tallegio nights?? Am I completely showing what an ignoramus I am right now?

Well anyhoo, since my brain is like a sieve as of late, I completely forgot to pick up some goat cheese after work. So my onion and goat cheese pizza/tart was now goat cheese-less. I thought that the spinach and chorizo would make up for it.

So, I caramelized the onions, like Gemma, in some butter. I rolled out the dough in a focaccia fashion and drizzled it with olive oil. Then, I added the caramelized onions, spinach and chorizo. I baked it. I tasted it. It was NOT good.

See, onions are kinda sweet when caramelized, and spinach doesn’t really have loads of taste, even though I sprinkled some parts of the pizza with Maldon salt. I guess I missed a lot of the pizza as it was really bland. The chorizo was the only real flavor maker of the whole thing, but I don’t consider that any kind of achievement. I could have just munched on the last bit of chorizo in the fridge and called it a night. 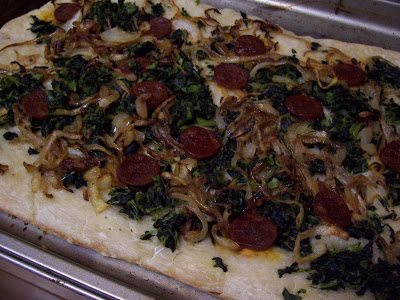 I guess I’ve made up for it as I baked my first batch of anything in my new oven – rugelach!! Mmmmm. I can’t believe I packed my frozen rugelach dough in a cooler bag and transported it all the way here, but I just had to do it. 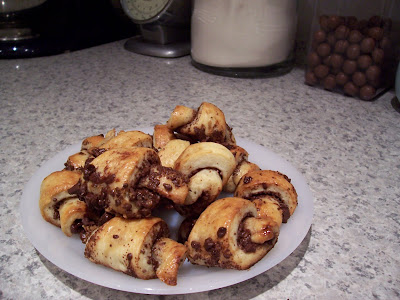 The rugelach turned out fantastic, though I couldn’t give the pre-baking egg wash to them because I didn’t have any eggs… ha! Well still fantabultastic.

At least I have these as a comfort since currently I’m feeling blue that the toilet keeps clogging and I set off the burglar alarm practically three times a day. When we packed up to come here, I was getting so tired and frustrated because as soon as I turned around I found more stuff that I needed to pack, and quickly. Now, everywhere I turn, I find more stuff I need to unpack. But in the midst of all this, I still found time to bake. My hubby would say I have my priorities all out of whack. I say, chocolate is the only comfort when I am in an empty house without an Internet connection.
Until then, dear readers.

Good luck in your new place Ilana! And you definitely have your priorities straight. I always bake when I am procrastinating too!

That's a shame, it sounded like it should have worked. Last night I did a tart with red onions, roasted peppers, basil and goats cheese which worked well too. Taleggio is just tasty Italian cheese which melts really well.