I'm making great progress with my New Years prep. I have started the curing process for the gravlax. I decided on doing Nigella's recipe from her Christmas special on the BBC after seeing Clarice's gravlax. Clarice is super adventurous when it comes to food. She really tries out all types of cuisine and is so bloody knowledgeable -- I was inspired to try this dish that I have never made or eaten before. Gravlax just speaks 'party' to me. Thanks for the inspiration, Claricita!

So I got a nice piece of salmon fillet with skin one one side. I lay it skin-side down in a shallow plate, and pasted it in a sugar-salt-English mustard-vodka emulsion. Nigella's recipe actually calls for gin but I didn't have any in the house.

After the paste goes on, some roughly chopped dill is placed on top to cover all parts of the salmon. Then it is flipped over and sealed in clingfilm. 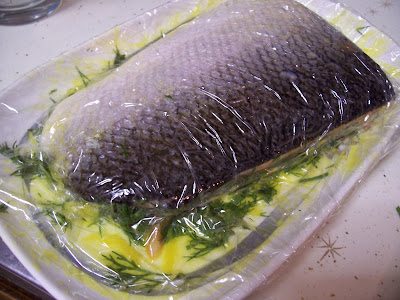 It is then put in the fridge with weights on top of it. It is left to cure for two to three days, and then sliced thinly, ready to serve.

I can't wait to slice this baby up!

I've also marinaded some olives for the party. We had some canned pitted black olives (I know, I know, but I didn't buy them!) so I wanted to jazz them up. I used Emeril's recipe as a model, but changed it up a bit based on what I had at home. So, to the black olives, I added a bit of its brine, some minced garlic, lime zest, orange zest, lime juice, olive oil and red pepper flakes. It smelled fab, and I think it will be a welcome addition to my tapas table.

And lastly, I made the dough for the Pizza Bianca and La Pizza Rossa. I am planning on using the dough for the 'rossa' and dividing it in two to make the bianca and rossa. The only change I may make is scratch the idea of the rossa, as I don't really have anything to serve it with, and just make the bianca as the main 'bread' to dip into the dips.

But, that decision doesn't have to be made right now. The dough is rising now. When it has doubled in size, I will punch it down and divide in two, and then freeze. The dough is pretty sticky -- and Tessa says it will be -- so I'm interested to see what kind of pizza it makes.

Tomorrow, I have other little things to take care of, so Sunday, hopefully, won't be too crazy. I put Rafa in charge of the booze.

The plans sound fabby - I'll be thinking of you (well probably I'll be in bed by US midnight - but still). The salmon looks and sounds delish.