I have been away from the blogging world for a while now. I haven't really been cooking anything worth mentioning, grabbing stuff here and there. My mind was fully focused on the Chanukah festivites that were to come... and then I got sick.

These last few days I have felt like I have been walking around with a motorcycle helmet on my head. Tired and congested, the last thing I wanted to do was bake and cook for Chanukah, but I promised my friend, Elana, I would bring some things to her party this past Saturday, so I had to come through.

Luckily, I discovered the wonderful world of freezing!

First up were Nigella's Cheesy Feet dough (see above). I am always very apprehensive of making cracker or cookie dough in my mixer as every recipe lately calls for a food processor! In fact, that was probably the only reason I never attempted this recipe, despite its rave reviews. The dough was a doddle to make -- it did indeed eventually all come together, and I froze the dough days before I would need to use it. And then, a couple of days before the party, I defrosted the dough, rolled it out using a fabulous technique Elana told me about, and put my cutters to work. The feet I had were too big (how ironic considering how I always complain my feet are too small for proper looking shoes) for the cheesy crackers so I got some fab cutters at the Broadway Panhandler -- mini dinosaur, snowflake, bell. I got a good amount of crackers - something like 30 - and they puffed up beautifully in the oven. I froze the baked crackers again, to be ready for the party.

I did the same with Nigella's rugelach recipe -- that is, make the dough, freeze, defrost, roll, bake, freeze again. I've made this recipe countless times, and it always turns out unbelievable. I think this has to be my favorite cookie. A close second would be Tessa's chocolate/cranberry cookies. 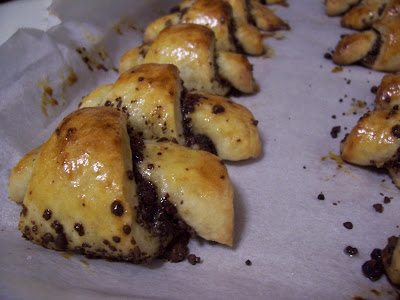 But the real 'balagan' started after I had these two cookies prepared. In Hebrew, 'balagan' means a real terrible mess. And not the type of mess that is easily fixed. Something that just takes over and becomes a thing. You just have to sit back and let it be.

I have been feeling very nostalgic towards my childhood in Israel again - hence the Hebrew name for this post title. It's quite funny that the food I am homesick for is actually kiddie food - that makes a bit of sense since I was a kiddie when I left Israel. So while cosmpolitan Israelis are eating ful and hummus and stuffed blintzes, I am craving Bamba, Bissli, ice lollies, chocolate milk in a bag. One thing I remember vividly from Israel are the chocolate balls. Dense and cold chocolate balls covered in coconut or sprinkles. We ate these in kindergarten when there was a birthday. The birthday girl or boy would be sitted in the middle, with a wreath of leaves around their head, their mouths and hands covered in chocolate. A prince or princess for the day.

I thought this would be a fun dessert to bring to Elana's party too, so I sourced info from the only two Israeli foodies I know, Jules and Francesca. I found a recipe on Ganenet.com or something like that; 'ganenet' is the word for a female kindgarten teacher -- the experts in making chocolate balls.

The ingredients didn't have measurements, because let's face it, after making it each time a kid has a birthday, I'm sure the ganenet doesn't need precise measurements.

I wasn't sure about the recipe, so asked for one from either Jules and Francesca. Francesca came through with a recipe from her babysitter, Hilla.

I'll type it out here so you could see how casual Israelis are about certain recipes:

Crush the biscuits then mix with the chocolit and sugar. Melt the chocolate in the micro, then add melted marg (also in micro) and milk. Mix everything together with (clean) hands, shape into balls, yada yada. You can also add rhum or vanilla essence if you wish in the first stage.

And here's the method below:

I crushed the tea biscuits... and added Chocolit (which is sweetened cocoa) along with the sugar. I prepared the milk chocolate and got it ready to be 'micro'-ed. 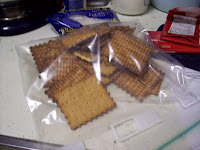 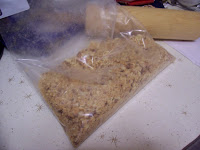 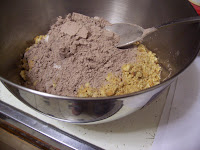 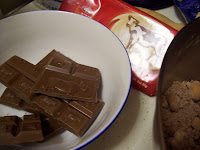 That is where the balagan started!! Maybe my microwave is off or milk chocolate doesn't melt well, but I found most of the chocolate unmelted with burnt parts. Highly odd. I was feeling pretty crappy health-wise and couldn't deal with this at that point. I plocked it into a saucepan with the butter and decided to just melt it all together. Somehow, it cooperated. I added the chocolate to the dry ingredients and mixed it all up. It became a nice chocolatey dough and easy to form into balls.

I wanted to roll them in blue and white sprinkles (for Chanukah, natch!) and coconut. The coconut was acting weird. Truth be told I never actually bought shredded coconut before so I wouldn't be sure how it would act, but it was way too sticky to, ironically, stick to anything. It didn't look impressive so I popped the couple I attempted to roll in coconut (yum yum) and rolled the rest in the sprinkles. Turned out pretty fabulous. 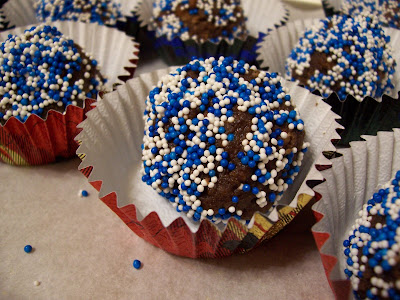 Thinking about it now, I am not sure why I made it more of an ordeal than it really was. I guess under the best of circumstances, it would have been laughable, how easy it was for me to mess up such a fool-proof recipe. I failed to see the humor then, LOL.

The chocolate balls, cheese crackers and rugelach were a hit!! I also made Nigella's Red Kidney Bean Dip, also from Feast, and it was mega-flavorful and lovely.

Elana was extremely grateful for helping her out with the food. She is a big-time foodie, and a lot of my inspiration to be a hostess with the mostess comes from her, so it was a nice feeling when I got an email from her saying, "Thank you for all your help... Actually the things you made were my favorite at the party." Yay!

Well missie, for such a 'balagan', you ended up with beautiful goodies!
Well done you
xx