Happiness is... a pink frosted cupcake and a cup of tea. 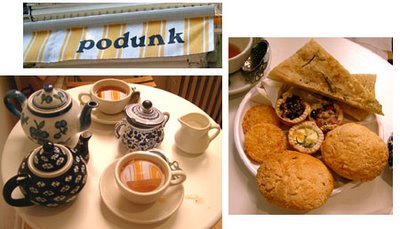 Po·dunk (pdngk) n. Slan.
A small isolated town, region, or place that is regarded as unimportant.


No matter where you live in the world, no matter who you are in the world, a crappy day is a crappy day, for everyone. For some reason people feel like since I live in New York, I only have fabulous days - that I'm Carrie Bradshaw and have something to do every night. Loneliness is loneliness wherever you go.

So, when a great day happens, I take note and appreciate it for all that it is.

I really should spent less time feeling sorry for myself because my life is good. Not good; great! Because of the great city I live in and a good, good friend, a mundane Sunday afternoon turned into a pretty fabulous day; probably one of the nicest I've had in a long time.

Elana and I do 'sunday brunch' on a semi-regular basis. I'd say, every couple of months, or so. We have always gone to a brunch place that was a standby for us; it rarely disappointed. We wanted to try something other than Penelope, so it was Elana's idea to venture to the Lower East Side because she had remembered during a recent meandering seeing a few brunch places in that area. It was a bit windy and cold, and we really didn't know where we were going, but spotted a 'tea room'. That's all it said, and I think there was just a letter-size piece of paper scotch-taped to the window that said 'Podunk'. We were in the mood to eat and were hungry, so kept going.

We spotted a couple of L.E.S. hipsters and asked them about a good brunch place. Without hesitation, one of them said Café Orlin. I knew about this café. I read somewhere, or perhaps it's in my Hummus File, that this was a joint owned by Israelis -- supposedly quite popular and always packed. But, we were keen to try it.

The wait at the café was only about 10 minutes and the wind died down. The guy seating us was Israeli, but of course, and said our name the way it should have been said. Eee-la-na. I had thought of it when he said our name, but Elana actually mentioned it. Respeck to the Ilana/Elana name!

We both had classic Israeli breakfasty/brunchy items. I had malawach, which is a fried dough, sort of like roti, and topped with over easy eggs and a tomato sauce. It came with olives and Israeli pickles - heaven. Elana had shakshuka, another one of my faves, and it was spicy in the right way. Delicious.

So another great brunch place, which is what we were after, is what we found. But the best part of the day came just a little bit later. Elana was in the mood for something sweet, so we decided to find that tea room again. And we did!

Words are hard to describe what this little tea room was like. There were antique-y items all around, and mismatched furniture and tables and chairs, and a bookcase full of interesting looking books. The menu was full of tea choices - there must have been a hundred different kinds, easy!

I will admit that it wasn't a cheap place. Most of the menu choices were more than $20 for a tea setting of two, but we found Tittle-Tattle, which was a pot of tea for two and cookies and cupcakes. What more can you ask for? We got a blend I don't even remember the name of anymore, and two of each of the following: gorgeous pink topped cupcakes, chocolate chip cookies, shortbread cookies and almond cookies -- all of this was $18 in total, and they didn't accept gratuities. I confessed to never having tea before from a tea pot. Exciting stuff! I was even silly and asked Elana to take a picture to commemorate this occasion (pic above).

Apparently, according to the owner (an interesting woman that had a kerchief on, an Amish-y dress, and Grandma Red Riding Hood glasses), the Tittle-Tattle tea service was enough food and tea for a couple of friends to have over a bit of gossiping before heading out on their way. Well the gossiping did occur - it was a lot of fun, to be transported out of the city even for just a little bit.

And now to some thoughts I've had about the place post-visit, and post-Internet research. Elana and I didn't know what a 'podunk' was, so I looked it up online when I got home. A small place, with the connotation of it not having important significance. I almost felt like the owner was putting herself down a bit. But then, I started reading reviews about the place, and I noticed how a lot of people were saying that she was nasty to them at certain times, and how she would get upset if people came to look around but decided not to stay. I had remembered a vintage sign above her at the counter that said NO SNIVELLING. It was strange; it seemed like she knew she had a good thing going, a safe and quite haven away from the crowds and pretentiousness, and if there was any negativity entering her small square foot home, it would be met with a disproportionate anger of some kind. I have to admit she did seem a tad bit off. She explained the tittle-tattle name of the tea service like she felt like she was on to a good thing, and wanted everyone to be as excited as she was.

That kind of makes me think of an article I read recently about the cupcake empires that seem to be cropping up in New York City. The very 'in the know' Halloumi, of Nigella.com, pointed this article out to me and others. So, we know that the owner of Magnolia is pissed with the owner of The Buttercup Café, and now there are all these little cupcake offspring all over the city, and even in Brooklyn. They all want to give you a perfect experience catered by sugary treats, right? But since when did all the backstabbing and bitching have to become a part of it? Give me an untainted cupcake please, with no politics behind it. The owner of Magnolia said that what she has created cannot be taken away; what has she created? Sitting in a cute place with a picture-perfect cupcake perched in front of you? A bite-size escape into sinful eating? Is she actually claiming that she has patented a feeling? The feeling of being 100% content with life, even if it is due to the sugar rush one is feeling at that exact moment. Such bullcrap. As long as the cupcakes all over the city, and all over the country, and all over the world, for that matter, are still delicious who friggin' cares that it was her idea first. You can't patent a feeling, woman. Get over yourself.

Maybe the owner of Podunk knows this. Maybe her little oasis, her 'little place of no particular significance', does not want to make a big mark. She is nestled between two brownstones, on a quiet, treelined street, in the Lower East Side. Maybe her place doesn't have the guise of peacefulness; maybe it IS peacefulness. Well Elana and I were certainly at peace. And I can't tell you if it was the perfect combination of butter, eggs, sugar and flour that did it, but happiness can be found in a cupcake with a baby pink buttercream frosting.

Ilana, i love reading your stories and this one is lovely too!
Thank you so much for sharing, sweetie.

I love the idea of going out to a teashop and having cookies and cupcakes with pink icing. I don't see those sorts of places here. Mmm - one day I will come to the US and make a beeline for that sort of cupcake! Thanks for the lovely descriptions and pictures - they inspire me to travel...
Kathryn x